The Difference Between a Prenuptial Agreement and a Will or Trust 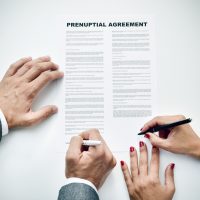 There was a time when most people heard the term “prenuptial agreement” only when watching soap operas or Hollywood movies or reading a novel. For many of us, prenuptial agreements seemed to be reserved only for the ultra-wealthy, where the continuation of dynastic family wealth was at stake.

Today, however, prenuptial agreements are much more common. In many cases, such as subsequent marriages, they make good sense. Similarly, wills and trusts are no longer reserved only for those with substantial wealth. Having a will or a trust is just something responsible people do. But despite the more common use of these tools today, a certain percentage of the general population still misunderstands the difference between the reasons for creating a will or a trust and the reasons for entering into a prenuptial agreement. What do these different legal documents do? And when should you use them?

When a married couple wants to ensure that their property passes according to their wishes to their heirs or other beneficiaries, a will or a trust can record those wishes and make it clear to anyone with an interest in the couple’s property who should get what, when they should get it, and how they may receive it. In addition, a trust can help a married couple manage their property if they become incapacitated (unable to make their own decisions) and can allow them to avoid the probate process for passing on their property when they die.

In many cases, a will or a trust provides adequate legal authority to carry out the deceased individual’s wishes for passing their property to their heirs or beneficiaries. This is particularly true when most of or all the couple’s wealth was accumulated during their marriage and as a result of their joint efforts to share the responsibility of earning an income and managing their domestic obligations. Wills and trusts may also be all that is needed to pass property on to children, particularly when those children are offspring of that marriage.

In some cases, however, wills or trusts may be inadequate to carry out the married couple’s wishes. This is particularly true when one of the spouses has significant wealth that they consider to be their own separate property and they want to leave it to someone other than their spouse.

The State of Maryland, the District of Columbia and every other state has laws designed to protect a surviving spouse from being completely disinherited by their deceased spouse. For example, imagine that a faithful spouse spent thirty years working at home, caring for children, running the household, and ensuring that the income-earning spouse had every domestic responsibility taken care of while they focused on earning a living for the family and saving for the future. Further, imagine that, during that time, the income-earning spouse never took any steps to jointly title any of their property with the at-home spouse. Then, after thirty years, the income-earning spouse became unfaithful to the at-home spouse and secretly signed a will leaving all their property to a new romantic partner, thereby disinheriting the at-home spouse and leaving them penniless. Most would agree that such a result would be terribly unjust and that the surviving at-home spouse should have the right to reclaim some, if not all, of the property passing to the new romantic partner of the now-deceased spouse.

Because this scenario has reared its head enough times in the real world, every state legislature has attempted to address this potential problem by passing laws typically referred to as elective share statutes. Most of these statutes allow a spouse to “claw back” a certain percentage of any property that passes from a deceased spouse to someone else. The amount that can be clawed back is often referred to as an “elective share” and varies from state to state. But the idea is essentially the same among all the states and is designed to avoid the kind of injustice that would otherwise result from a scenario like the one described above.

Where Application of Elective Share Laws Can Go Wrong

On the other hand, there are some scenarios where elective share statutes can actually produce an unjust result of another kind. For example, imagine that an elderly single individual had worked their entire life to save money and leave their home and savings as a gift to the orphanage that raised them. Further imagine that, as time went on, this individual met a somewhat younger romantic interest who had substantial property of their own as well as a generous income that would provide a comfortable living for the rest of their life. The two individuals decide to marry and verbally agree that the orphan spouse would still leave their property to the orphanage as planned. However, upon the orphan’s death, because of the state’s elective share law, the new spouse changes their mind and files a claim in court against the property that the deceased spouse’s will has directed to the orphanage, thereby overriding the will so that the surviving spouse now inherits a substantial portion of the property that was intended for the orphanage.

This is certainly not what the orphan spouse would have wanted. But unfortunately, the deceased spouse’s ignorance of the law will most likely be an ineffective argument for the orphanage to make in court.

Prenuptial Agreements to the RescueA prenuptial agreement can be very useful in such a situation. A prenuptial agreement is essentially a contract between two individuals preparing to marry that details how property will be owned throughout the marriage and what rights each spouse has to the property of the other. The agreement specifies the nature and extent of the property that each spouse is bringing into the marriage as well as how that property will be divided if the couple ever divorce or one spouse dies during the marriage. The agreement can outline the extent to which a spouse has the right to give their property to their children from a different relationship or to charities or other beneficiaries through estate planning. It also allows each spouse to waive certain rights to the property of the other spouse, such as elective share rights.

Why would a spouse ever give up an elective share right in a prenuptial agreement? It could be for a variety of reasons. Perhaps the spouse would like the other spouse to waive their right to certain separate property of their own. Or perhaps the marriage simply cannot move forward unless these rights are waived because the nature and extent of the wealth is so substantial that one spouse (or more commonly, the family of the wealthier spouse) will worry that, without a signed prenuptial agreement, it would be unclear whether the marriage was based on genuine affection for the wealthier spouse or merely affection for that spouse’s money.

When Should You Consider Getting a Prenuptial Agreement?

In general, a prenuptial agreement is helpful under the following circumstances:

Prenuptial agreements, wills, and trusts can be powerful legal documents that can play a crucial role in helping you achieve your financial goals and protect you and your loved ones from unfortunate surprises when it comes to passing on your property to those you care about. Properly implemented, they can provide significant peace of mind. If you would like to learn more about this topic, contact Andre O. McDonald, a knowledgeable Howard County, Montgomery County and District of Columbia estate planning, special-needs planning, veterans pension planning and Medicaid planning attorney, at (443) 741-1088; (301) 941-7809 or (202) 640-2133 to discuss these important legal tools.

DISCLAIMER: THE INFORMATION POSTED ON THIS BLOG IS INTENDED FOR EDUCATIONAL PURPOSES ONLY AND IS NOT INTENDED TO CONVEY LEGAL, INSURANCE OR TAX ADVICE.