Dementia and its Effect on a Marriage (UPDATED: August 2019) 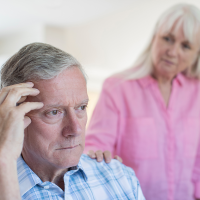 (Columbia, MD) When someone you love, in particular – your spouse – becomes ill, you want to help them get well. But what happens when the illness is dementia? A marital relationship that could have spanned years or decades becomes subject to enormous change, and that change is not a slow linear progression of predictability. As cognitive decline worsens, it’s an up and down interaction of being recognized and accepted by your spouse … or not. Unfortunately, while most people have every intention of honoring their vows of “in sickness and in health,” many are simply unprepared for the significant emotional impact that a dementia diagnosis can have on a marriage.

Somewhere in the world, every three seconds, someone is being diagnosed with dementia. Dementia is a catchall phrase that refers to many types of neurodegenerative diseases that cause cognitive decline. Neurodegenerative diseases bring about the onset of dementia including but not limited to: Alzheimer’s disease, Lewy body dementia, Parkinson’s disease dementia, vascular dementia (currently the second most common form of dementia), amyotrophic lateral sclerosis, and the most recently identified LATE (limbic-predominant age-related TDP-43 encephalopathy) which mimics Alzheimer’s symptoms but is caused by a different brain mechanism.

There is a long-held view that cognitive decline is a normal consequence of aging; however, this has been disproven by the successful aging of many individuals who remain in full control of their mental faculties. Just because you get old does not mean you will get dementia; and yet, the likelihood that you will get dementia does increase (doubling every five years) over the age of 65, in particular, if you carry the apolipoprotein E gene variant APOE ε4.

The Economic Impact of Dementia

The economic impact of dementia is profound. The Center for Disease Control and Prevention (CDC) projects that by 2040, the US cost of treating Alzheimer’s disease alone is estimated to be a staggering $379 to $500 billion annually. These costs include the direct costs of social and medical care as well as care provided for by unpaid family care providers. It is very costly to create a secure scenario for those who have the disease. Although Alzheimer’s can now be detected 20 years before the onset of symptoms, there is no known cure for it or other forms of dementia. Research efforts to find a cure have been expensive without much reward, and as such many drug companies are halting their efforts to find a cure for economic reasons. Those who have dementia have a disability and dependence on their spouse and/or other loved ones, and a health care system that is woefully unprepared for the scale and cost of maintaining their lives. Some biomarkers that identify Alzheimer’s disease early on may accelerate the development of new therapies as the disease timeline progression is substantial, but it remains unknown which treatments will be most effective and at what point in the disease continuum.

Cognitive Decline and the Impact on a Marriage

All people living with dementia will eventually exhibit combinations of three symptoms:

These symptoms can leave the healthy, unimpaired spouse at a loss with regard to communication issues and intimacy. While some spouses can cope with the monumental changes it brings to a marriage, many spouses cannot. Feelings of hopelessness, caregiver inadequacy, and embarrassment are often hallmarks of the caretaker spouse.

Caring for a spouse with Alzheimer’s or other forms of dementia can be exhausting. It is similar to watching a toddler; the person cannot be reasoned with or left unattended. People with dementia can live for many years, and it is presenting a real challenge to care facilities as well as spouses. What would you do if your spouse of many years has Alzheimer’s, is in a nursing home and strikes up a romantic relationship with another resident? Would it change how you cared for them? Would it give you the freedom to go outside your marriage vows and begin a relationship with someone else?

Everyone is different and has different emotional tolerances. Famously, retired Supreme Court Justice Sandra Day O’Connor encountered this very problem. Her longtime husband was diagnosed with Alzheimer’s. While she cared for him as long as possible, even retiring from her Supreme Court position in large part to have time to tend to him, he eventually had to be moved to a care facility. It was in this care facility he began a relationship (often referred to as a “new attachment” in the case of dementia) to a woman only known as “Kay.” Sandra O’Connor had the emotional courage and presence of mind to understand this was not a personal slight by her husband. Instead, she embraced his new relationship willingly saying in part that if it brings him any happiness while suffering this terrible disease she was on board to support his choices. Sadly, O’Connor’s husband passed away in 2009, and O’Connor recently announced that she herself has been diagnosed with the beginning stages of dementia.

Can Dementia be Prevented?

The number of people suffering from dementia diseases is rising, but that is most likely because the overall number of aging people is increasing. Even though dementia is not an inevitable consequence of aging, the increase of its probability plays into the laws of large numbers. There are reports of certain modifiable lifestyle choices that can increase the chance of not developing dementia disease.

In particular, diet seems to influence oxidative stress and inflammation in the brain. A Mediterranean diet appears to have a positive effect on brain health in general. Exercising and maintaining positive social relationships also helps maintain balanced brain health. Combining these three aspects is most effective for brain health. Diet, exercise, and positive social relationships may reduce the risk of a dementia diagnosis. These modifiable habits are proactive to keep the brain from neurodegeneration rather than reactive to a diagnosis.

How to Prepare for the Future

While every step that can be taken toward prevention should be taken, preparing for an unknown future is wise. Some states are advocating and providing the legal framework for advanced care planning for individuals in the event a person is diagnosed with dementia. Beyond decisions regarding medical orders for life-sustaining treatment (MOLST) and do not resuscitate orders (DNR), couples are now encouraged to explore their expectations in the event a spouse with a dementia diagnosis enters into a new attachment outside of the marriage. It is also important to address whether the spouse without dementia might form a new attachment.

As we age, there is an increased incidence of dementia. Due to advances in medical technology we are living longer with dementia and other diseases. While a person with dementia may be stripped of their memories, they are still a human being who needs warmth, contact, and interaction. It is a basic human need to love and be loved, and that connection can quell some of the psychological problems of isolation and loneliness many dementia patients experience.

Having this discussion with your spouse or partner is certainly not easy. No one wants to imagine the possibility that this can happen to them, and yet the possibility is very real. Ideally, these wishes will be documented as part of a long-term care plan created with the help of an elder law attorney that also addresses what type of care is desired, and how it will be paid for.

Though there is always hope for a future solution, there are still the issues at hand of today. A diagnosis of dementia has profound consequences for health and wellness, relationships, retirement, and economic wellbeing. Some states already have health directive templates to address future issues of dementia while a person is still mentally capable of making sound decisions. Like all things in life, it is best to be proactively managing circumstances rather than reacting to problems.

At McDonald Law Firm, we can help you and your loved ones prepare for the possibility of a dementia diagnosis. We help families determine the best type of care, how to pay for that care, and how to put the proper legal documents in place to ensure the appropriate persons are named to step in and make decisions for you or your spouse, if needed.

If we can be of assistance with your family’s long-term care planning, please contact Andre O. McDonald, a knowledgeable Howard County estate planning, Medicaid planning, and special needs planning attorney at (443) 741-1088 for a no obligation consultation.